Do your budtenders “get” terpenes? They should.

Home / Cannabis Business / Do your budtenders “get” terpenes? They should.

Terpene literacy is becoming all-important in the cannabis industry. Here’s a crash course.

Have you ever seen someone sniff a nugget of cannabis like it’s a glass of Malbec? It happens. Just as a wine snob might try to pin down the region and type of grape a wine originates from, it’s easy to imagine weed snobs waxing on about a plant’s terpenes. (When we say “weed snobs,” we mean it in the most positive way possible). Terpenes give cannabis its scent and flavor, so having budtenders equipped to discuss the aesthetic and medicinal properties of terpenes, along with labeling that includes terpenes, is a competitive advantage. Today’s competitive advantage, however, is tomorrow’s necessity. Your budtenders need to be able to give clients accurate, helpful information about cannabis terpenes.

We’ll focus here on why cannabis terpenes and terpenoids* are so important generally, cite a few useful examples, and direct you to resources for further learning.

*We’re using the words “terpenes” and “terpenoids” interchangeably. While they aren’t exactly the same, they’re a similar chemotype and industry professionals including breeders consider this acceptable for day-to-day discussion.

What are terpenes, anyway?

Terpenes are components of essential oils and give cannabis its odor. Conifer pines, citrus fruits, lavender, hops and black pepper all owe their distinct smells to terpenes. If you’re a cannabis industry professional you’re probably familiar with the term entourage effect. This refers to how terpenes and pytocannabinoids modify—and in many cases, enhance—each other’s effects.

An emerging class of cannabis connoisseurs care every bit as much about terpenes as cannabinoids. In April of last year, High Times reported that “The word terpene is searched about five times more now than it was two years ago.”

Cannabis terpenes are becoming more and more valued for their aromatic qualities, flavor and  medicinal qualities. Terpene profiles are increasingly featured in descriptions of cannabis strains. Product labels are starting to list terpene concentration in addition to cannabinoid profiles.

A plant’s terpenes, rather than it’s cannabinoids, determine whether it’s a sativa or an indica. Because of its sedating effects, the terpene myrcene in particular is associated with indica. If you switched the terpenes from a sativa and an indica, leaving everything else intact, the original sativa would be in effect an indica and vice versa.

First-string terpenes and their effects

Terpenes have a variety of well-established effects in isolation and modify the effects of THC. There’s reason to believe certain terpenes compliment the beneficial effects of CBD as well (again, the entourage effect). Terpenes “are quite potent, and affect animal and even human behaviour when inhaled from ambient air [in very low concentrations],” writes medical scientist Ethan Russo in the British Journal of Pharmacology. “They display unique therapeutic effects that may contribute meaningfully to the entourage effects of cannabis-based medicinal extracts.” (Russo, 2010)

A quick inventory of the effects of individual terpenes includes more psychiatric and medical benefits than you can shake a stick at. Some of these findings are based on robust scientific evidence and some are more preliminary, so they shouldn’t be used to make hard and fast medical claims. They can, however, help consumers make more informed choices.

As the name suggests, pinene gives conifer pines their scent. If you’ve ever stuck your nose in a jar of weed and felt like you were in Golden, Colorado, it’s probably because of the pinene. (Unless you were actually in Golden, in which case you were lucky two times over).

So it’s good for your tummy. 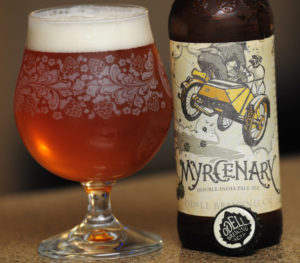 Russo writes that “myrcene is a prominent sedative terpenoid in cannabis, and combined with THC, may produce the ‘couch-lock’ phenomenon of certain [strains] that is alternatively decried or appreciated by recreational cannabis consumers.”

It’s also worth mentioning that Odell’s Myrcenary IPA, one of the greatest beers ever made, is named after this venerable terpene. Just approach with caution: it’s 9.3 percent alcohol.

Additionally, limonene triggers apoptosis (cell death) in some types of breast cancer. This is exciting, but it doesn’t mean weed and lemon water cures cancer. Be sure to impress upon your colleagues that cancer treatment is a delicate subject with ethical dimensions that shouldn’t be taken lightly.

The most authoritative scientific paper on terpenes is a 2010 article in the British Journal of Pharmacology entitled “Taming THC: potential cannabis synergy and phytocannabinoid-terpenoid entourage effects.” The author, Ethan Russo, is a senior medical advisor to GW Pharmaceuticals (NASDAQ: GWPH). Russo helped popularize the term entourage effect, and the FDA is likely to make medical history next month by approving GW Pharma’s cannabis-derived anti-seizure drug Epidiolex. So it’s legit.

This is a technical scientific paper, but an educated layperson can read it in one sitting and learn a lot. Roll up your sleeves—here’s the link.

For a quick, visual overview, Leafly published a great infographic featuring six of the most prevalent and well-understood cannabis terpenes. It’s worth printing it off in poster size both for display and as a quick reference. Take a look.

THC myopia is a thing of the past. Cannabis consumers, patients and researchers have come to recognize the value of the plant’s chemical diversity. In Russo’s groundbreaking paper he endearingly referred to cannabis as “this venerable plant,” in a nod to the therapeutic implications of phytocannabinoid-terpenoid synergy.

Stick that in your pipe and smoke it.